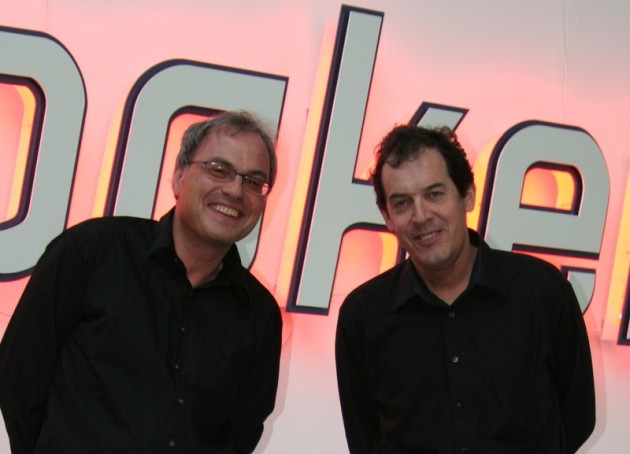 The Duo Conradi-Gehlen was founded by Stefan Conradi and Bernd Gehlen after both participated in the television recording of Mauricio Kagel’s “Repertoire” from “Staatstheater” in 1986.

At this time, Stefan Conradi and Bernd Gehlen were both studying with Professor Wilhelm Bruck at the Academy of Music in Karlsruhe.

The Duo Conradi-Gehlen is also active in the area of concert pedagogy and the imparting of new music in secondary schools. Throughout the country, the Duo works with school classes from all areas, from furtherance schools to high schools, in order to make the most varied expressive possibilities of modern music accessible to young people, to help them experience themselves and to express themselves in concerts.

At the concerts of the Duo Conradi-Gehlen one can hear, alongside concert and electric guitars, a wide range of other instruments including banjo, steel-string guitar and ukulele. Experimental sound-producers round off the colourful sonic spectrum.

Stefan Conradi, born in Istanbul in 1960, received his first guitar instruction from Fritz Mühlhölzer in Freiburg and was a prize winner at the competition “Jugend musiziert” (Young People Making Music) in 1981. He completed his studies at the Academy of Music in Karlsruhe with Wilhelm Bruck in the summer of 1987. After continuing studies at the Academy of Music and the performing Arts in Vienna, Stefan Conradi has been working at the music publishing house of C. F. PETERS and is in charge of contemporary music there. Alongside this, he plays in various ensembles and orchestras ranging from classical to pop music. He has participated in CD recordings, radio recordings and TV productions as a guitarist und electric bassist. His special commitment today is to new music. Thus Stefan Conradi has encouraged many composers to write new works for the Duo Conradi-Gehlen.

Bernd Gehlen, born in Aachen in 1959, received his first instruction from Shinji Marujarna and then studied with Wilhelm Bruck at the State Academy of Music in Karlsruhe. Alongside his teaching activity, Bernd Gehlen is Department Head at the Bietigheim-Bissingen Music School. He directs the guitar orchestra there with international exchanges and concerts in Europe and North America. In addition, he is an instructor at various academies of music. Alongside concerts with the Duo Conradi-Gehlen, he is in demand as an orchestral guitarist with many great German orchestras. Bernd Gehlen performs regularly with A TRE – Music for Three Guitars as well as diverse chamber music ensembles. His activities are rounded off by numerous television and radio productions, revealing his far-reaching and multifarious musical commitment. For example, he is committed to “Netzwerk Süd,” a project subsidised by the Federal Cultural Foundation and active in diverse model projects for the imparting of modern music.